At the invitation of Archbishop 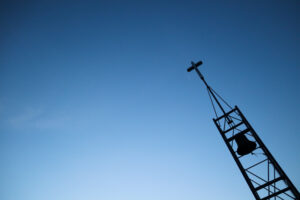 McKeefry, Kopua Monastery was founded on June 9, 1954, on a property donated to the Church by Tom and Rosalie Prescott. The founding community of six monks, led by Fr. Basil Hayes, came from the monastery of Mt. Melleray, Ireland. Other groups arrived from Ireland in 1955, 1958 and 1959. Fr. John Kelly and Fr. Conleth O’Byrne completed the Irish contingent arriving in 1967 and 1969, respectively.

The pioneers lived in the shearers’ quarters on the property and set about erecting a monastery from prefabricated materials to provide accommodation for a larger community. These buildings, intended to be temporary, still serve their purpose today.

In 1959 the General Chapter of the Order raised Kopua to the status of an abbey. Fr. Joseph Murphy was elected abbot on April 9th, 1960 and continued in office until 1986. During these years the Catholic Church was stirring, catching up with modernity, and the Decrees of the Second Vatican Council began to make an impact. Renewal was required of the community. Monks were offered the opportunity for higher studies in Rome, Latin gradually gave way to English in the Liturgy and the emphasis placed on fraternal life in community led to significant changes in lifestyle.

Tom Prescott died in 1967. Five years later Rosalie urged the community to initiate a Farm Cadet Institute so as to put into partial effect the hope they both shared for the establishment of an agricultural college. The Institute closed in 1980. Rosalie continued to live with her son, John, on the property until her death on July 17th, 2003, four days short of her 104th birthday.

Following the retirement of Fr. Joseph from the abbatial office, Fr. Basil Hayes was elected abbot in 1986. His resilience, tenacity and charm, which had been used to advantage in the difficult early years of the foundation, were once again in evidence. He had the pleasure of hosting the Asian and South Pacific Regional Meeting of the abbots and the delegates from their communities in February 1989. Fr. Basil died from a heart attack four months later.

The community had more than its fair share of trials and tribulations during these years. Abbot Basil was the tenth monk to be buried in the cemetery. Most of the deaths were premature and the causes were many, ranging from a tractor accident (Fr. Robert Kiely in 1967) to various forms of cancer and heart problems. A steady stream of candidates entered the community only to depart with time and this affected morale. The loss of some of the pioneers, incardinated into various dioceses to take up parish ministry, was a disappointment. The community was uncertain and diffident about how best to integrate the candidates arriving from the South Pacific Region. The demands of a changing Church within an accelerating and changing world put strain on leadership and resulted in stresses and strains within the community.

Fr. John Kelly was appointed superior of the community following the death of Fr. Basil and elected abbot in 1992.

Since its foundation the community had received generous assistance from many people. In the 1990s Paddy and Millie Bradford took up residence for seven years and managed the farm; Christine Ash commenced assisting in the Guest House in 1994 while Tim Farrell arrived in 1996 and helped on the farm for six years. Mr Brian Walsh came to the Monastery to help out on the farm for a year in 1985. He has stayed ever since and will soon celebrate the silver jubilee of his time at Kopua.

A core group within the community persevered to carry on the tradition. These are represented today by the following: Fr. Niko Verkley, emigrated from the Netherlands and entered the community in 1966 after working as a lay missionary in Tonga. Br. Alphonsus, a Brother of the Christian Schools, transferred to the community in 1969, eventually embarking on the eremitical life. Br. Bruce Cleaver, a native of Auckland, entered in 1980 and was soon joined in 1981 by Br. Kalolo Tonga from Auckland.

Throughout its history the community supported itself, maintained its charitable commitments and subsidised the Guest House with mixed farming: dairying, beef, sheep, pigs and potatoes. Other small-scale enterprises were: cropping, the grafting of root stock for orchardists, carrots for the Rabbit Board, strawberry plants and orchids. By the end of the millennium dairying and bull beef were the focus of activity.

The community elected Br. Brian Keogh, a monk of Tarrawarra Abbey, Australia, as their abbot in 1998. The community, convinced that the founding vision should be completed, set up an Advisory Board of laymen to assist with the restructuring of finances and the development of the farm now managed by lay workers. Then Hugh Tennent, architect, and Catherine Alington, landscape architect, were engaged to design a permanent monastery to be built in three stages. Stage I, work on the Hospitality Complex which was our most pressing need, got underway in 2007. The new Guesthouse was blessed and opened in June 2008.

We have a Vision for the future and we pray to God that we will continue to achieve more of it in the years ahead.

Mr. Tom Prescott of Kopua, Takapau Parish called recently. He is anxious to leave his farm, 500 acres freehold with some other acreage leasehold to the Church. He wonders whether an arrangement could be made whereby after his death, his wife’s interest could be sustained and in the event of her death his adopted son, John, could have a home.

2000 – The community commences a program of discernment about its future. Eventually a Vision for the Future is articulated.

2004 – The community celebrated the Golden Jubilee of its foundation. 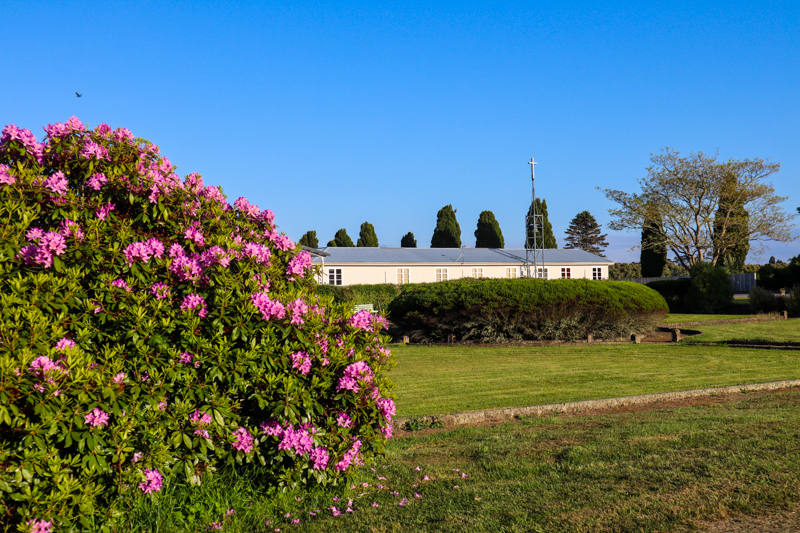 some flowers nearby the church