Christian monasticism is the search for God through the creation of time and space in which the inner life may flourish. For the monks, the spiritual world becomes the primary reality in living.

Monastic life is one expression of Christ’s abiding presence in his Church. It is a response to a particular call from the Holy Spirit to imitate and continue the intense union with God lived by Jesus.

The Gospel is the basis of all Christian monasticism and its supreme law. Monks seek above all to put on Christ, to be so formed by God’s grace that they are progressively possessed by Christ’s ardent love for the Father and his compassion for human beings.

The contemplative life is a gift from God. To develop, however, it needs to learn from the experience of others. The art of living in mindfulness of God is passed on from one generation to the next. It is for this reason that the monks have always greatly cherished the wisdom we receive from our forebears. It is the fruit of the experience and expertise of so many holy men and women who dedicated their lives to seeking God.

Primitive monasticism had its origins in the life of the early Church. Among the scattered urban groups of ascetics many sought the greater quiet of the desert and the guidance of the saints who lived there. From the third century, in Egypt and elsewhere, thousands attached themselves to such outstanding spiritual guides as Pachomius and Antony to learn to find their hearts and experience for themselves the gift of salvation. As the years passed a great fund of spiritual wisdom developed. This was eventually written down and circulated for the guidance of future monks. This experiential literature took its place alongside the Bible, the liturgical texts, the inspirational treatises of the great doctors, to form a basic library of spiritual instruction in the centuries that followed.

By the fifth century monastic rules began to appear which described a program of life based on this wealth of teaching and experience. In the West the paramount rule was compiled by Benedict, abbot of Subiaco and Monte Cassino, called the Patriarch of Western Monks.

The rule of St Benedict is a modest document that, in its pragmatic Roman way, makes provision for the establishment of a “school of the Lord’s service” in which a monk can learn to grow in goodness through the living of an evangelical life. What makes Benedict’s work distinctive is its respect for the com 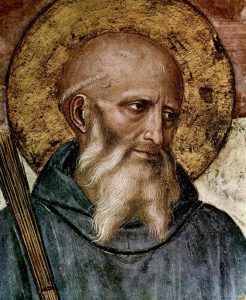 plexity of the human condition and its moderation and reasonableness in the demands it makes. The result is a monastery with a wholesome atmosphere in which the monks grow both humanly and spiritually, and a community which has something to offer to the Church and to the world.

St Benedict established each monastery as a local church, governed by a dual authority – a rule and an abbot. One supports and complements the other. The rule is a channel of tradition, the office of abbot embodies the possibility of adaptation to special local circumstances. The result is an institution which has an in-built flexibility that enables it to maintain its historical identity while responding to different local conditions.

It was this adaptability which enabled Benedictine monasticism to survive the breakdown of western civilisation that followed the decline of the Roman Empire. During the Dark Ages the monasteries became the custodians of culture and Christianity in an otherwise disordered world. They were also springboards for an emerging future.

As Europe changed and became more unified in the early Middle Ages, a more systematic attempt to update the monastic way of life was needed. In the 11th century many initiatives were taken to recover the essential dynamism of the Benedictine charism and to re-express it in contemporary terms. Among those that proved successful was the Cistercian reform of 1098, initiated by St Robert of Molesme, St Alberic and St Stephen Harding.

The “New Monastery” was founded at Cîteaux, near Dijon the capital of Burgundy. The Cistercian program was an expression of a desire for a simple and more radical lifestyle, an attempt to give priority to the search for God in a manner that made sense to the twelfth century. This involved a return to a humble and authentic way of life, with more space for prayer, more bite to the practice of poverty and less direct involvement in temporal affairs.

Where Cîteaux differed from many similar enterprises was in the quality of the men it attracted. St Bernard of Clairvaux is well known, but there were others including Aelred of Rievaulx, Guerric of Igny and William of St Thierry. These men chronicled the experience of the many thousands who flocked to Cistercian monasteries throughout Europe. The Cistercian Fathers, as they are called, left behind them a substantial body of spiritual writing which continues to animate many, both inside and outside the cloister.

It is difficult for us in the twentieth century to conceive the immense vitality of these monasteries or to understand the impact that St Bernard had on the Church and the world of his time. Such monastic communities played an important role in the reform and renewal of the Church, not only by their prayers but also by their enthusiasm, their wisdom and the obvious integrity of their lives.

In the centuries that followed the fervour of the monasteries lessened as the Church itself entered a period of regression. Because of plagues, social upheaval, and religious controversy – as well as human weakness – monasteries emptied. The result was compromise and decline.

Among the many movements of the monastic reform was one associated with the name of Armand de Rance, abbot of the monastery of La Trappe. Reacting against the prevailing laxity of the 17th century, he became the leader of a movement of “Strict Observance” which by the 19th century, had spread all over the world. In 1892 the Trappists and others formed themselves into a new Cistercian Order now known as the “Cistercian Order of the Strict Observance” (O.C.S.O.)

Today the Order has more than 150 monasteries with about 3,000 monks and 2,000 nuns. These are located in 38 countries and in every continent. The best known Cistercian of this century is the American author, Thomas Merton, whose books have helped many seekers of contemplation. 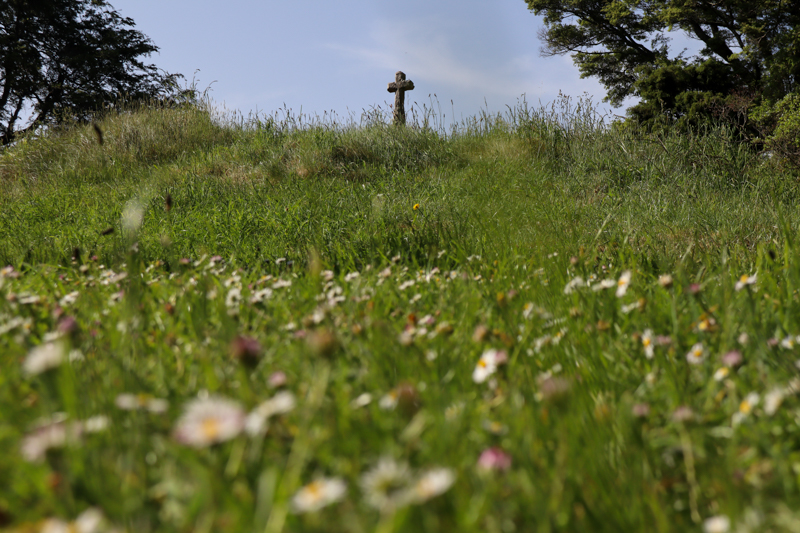 Wooden cross along a walking track.

1098 – The founding of the abbey of Cîteaux in Burgundy, France, by a group of Benedictine monks from the monastery of Molesme. The beginning of what was to become the Cistercian Order. Robert, Alberic and Stephen are honoured as the Founders.

1142 – Abbot Bernard of Clairvaux, at the request of Bishop Malachy of Armagh, sends a group of monks to found the first Cistercian monastery in Ireland at Mellifont.

1539 – The beginning of the end of Cistercian life in Ireland with the Dissolution of the monasteries and the suppression of Catholicism.

1829 – Catholic Emancipation, which removes all the important restrictions placed upon Catholics in public life.

1832 – The founding of Mount Melleray Abbey in Co. Waterford, Ireland.