Bernad Bonowitz, OCSO, the retired abbot of the Trappist monastery Our Lady of Novo Mundo in Brazil, reflects on the challenges of discerning for the monastic priesthood.

Do all monks become priests? On the Contrary. The perception has grown in recent decades that primitive monasticism – the golden age of monasticism – was essentially a lay phenomenon. Often enough there was not a single priest in a monastic community of the early centuries, and the community would go en masse to the nearest parish to participate in the Sunday Eucharist. A symbolic indication of a gradually decreasing identification of the monk with the clerical state is found in the classification of Saint Benedict. Throughout the Middle Ages and up to the nineteenth century, it was more than obvious that Benedict must have been a priest. At the end of the nineteenth century, he was reassigned as a deacon. (There is a stained glass window of him vested as a deacon in one of the chapels of my first monastic community in Massachusetts.) Today the great majority of scholars are convinced that Benedict was neither priest nor deacon. According to them, our holy father Saint Benedict was in reality our holy brother Benedict. Father still, of course, in the sense of being a spiritual father, a begetter of spiritual life in the hearts of his disciples by his doctrine and example. But as in “Father Benedict”? No.

Where does this leave a young man who feels a call to monastic life and an equally strong call to the priesthood? It leaves him without any guarantee of future priestly ordination – something, he is told, that will be discerned only after solemn profession – and it leaves him with the obligation to consecrate himself totally to growing into his identity as a monk. As far as intellectual formation is concerned, the years of initial formation are oriented almost entirely to monastic studies. What the novice and junior professed study are the Scriptures, the Rule, the writings of the Fathers of the Desert and the medieval monastic writers, monastic values and monastic practices, the psalms, the practice of lectio divina, the liturgical year, the practice of interior prayer.

All of these are “studies” in the original sense of the Latin word. They are objects of effort and application that the novice devotes himself to for no other reason than to become a monk. He does not attend classes on prayer so that one day he can teach other people how to pray, but so that one day, by the mercy of God, he may become a man of prayer. He does not study the sacraments so as one day to be able intelligently to administer the sacraments. Rather he studies the sacraments because to be a baptized, confirmed, and “eucharistized” human being is at the center of his identity as it is meant to be at the center of the identity of every Christian. If there is anything pastoral about his monastic studies up to the time of solemn profession, it is that he is being formed by Christ, the pastor of the whole Christian flock, as a genuine sheep of his pasture.

But to return to the question of the preceding paragraph: what about the monk in formation who is convinced of a call both to the monastic life and to the ministerial priesthood? Actually this situation is not as difficult as it seems… during his first years in the community, he gets to receive a clear and solid grounding in his monastic vocation. This prepares him to confront head-on and in a fully informed way the essential question: “Do I want to be a monk?” without its being diluted or confused by his engaging in seminary studies at the same time that he is meant to be immersed in the work of acquiring a monastic identity.

Third, the long deferment of the fulfilment of his desire to be a priest should serve to test and purify his motivation. As Saint Gregory the Great wrote in his Homilies on the Gospels, “All holy desires grow by delay. If they do not grow, they were never truly holy desires” (Homily 25). Fourth, he comes to perceive that in the context of the enclosed monastic life, there is relatively little opportunity for ministerial activity. Unless he happens to be chosen by the abbot as guest master, he will not have much occasion to do pastoral counselling. He will almost never baptize, marry, or anoint the sick. He will hear confessions only if the brothers choose him freely as their confessor – a wonderful stimulus for living in peace and charity with his brethren in the community. (No monk of our day and age is going to let himself be forced to go to confession with Father Sourpuss.) He will give a full-length homily perhaps every two months, depending on the number of priests in the community, who usually take turns… All that he is sure of, so to speak, is that if he is ordained, every day he will celebrate or concelebrate the Eucharist with and for his community.

By divine providence, it can happen that it is exactly this possibility of celebrating the Eucharist that is at the heart of a monk’s desire to be a priest. The young monk is a fervent disciple of Christ and seeks for the way to become as close to him – as one with him – as possible. The way to his objective, he intuits, is the Eucharist. It is not that he doubts the intimacy with Christ that is bestowed on all Christians who participate in the sacraments. As a baptized Christian and religious, he has already lived that intimacy for many years; it is the experiential basis of his present desire. Nonetheless, something in his heart tells him that there exists a nearer access to Christ, perhaps not necessary for everyone, but personally necessary for him. He wants to be united to Christ in his character as high priest and as holocaust. He wants to offer Christ to the Father and to be offered in Christ to the Father. He perceives what might be described as a third kind of priesthood, alongside the priesthood of all the faithful, and the ministerial priesthood: a mystical priesthood founded on an intense communion and identification with Christ in offering the sacrifice of the Mass. All readers, according to their theology and spirituality, can judge whether such a perception is legitimate. I think it is.

And while you’re evaluating, please pray for our community. God willing, we’ll be ordaining a few more monastic priests over the next few years. 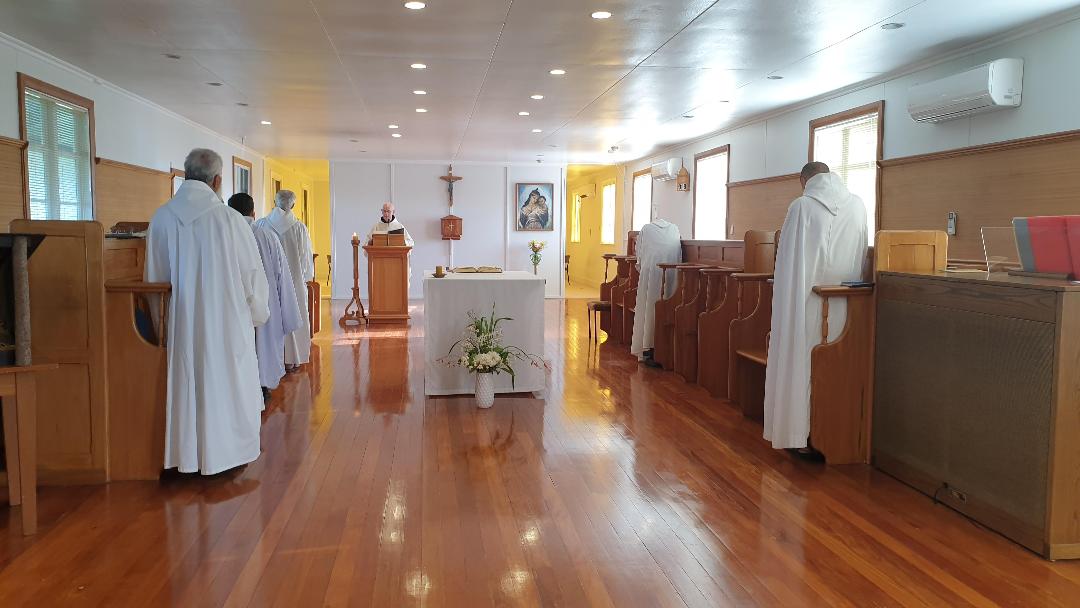